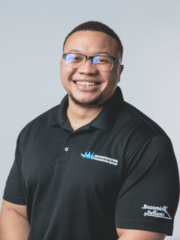 Dexter is an enthusiastic, sales-driven professional, who likes building lasting relationships with new and existing customers while offering superior customer service. Growing up, he spent summers working at his Aunt’s HVAC company. After finishing school, his love of fitness and health led him to a career in sales at LA Fitness. After several years, he was quickly promoted to General Manager for his strong people and managerial skills. He is motivated by constant improvement and his family and, his favorite snack is oatmeal peanut butter cookies.

In his role with NV Waterproofing and Foundation Repair, Dexter hopes to continue his commitment to customer service by prioritizing the needs and concerns of our customers and more importantly, by making their homes safer for them and their loved ones. It is this attitude and drive that makes Dexter a great asset to our team.

Back to Previous Page Back to Meet The Team
FREE Inspection & Estimate!

It only takes a few seconds.